Ebenezer Scrooge Is Back in Town:

It was 25 years ago this December that an unheralded play called A Gilbert & Sullivan Christmas Carol had its world premiere at a church in Garden City.  Since then that play has been seen in dozens of productions around the world, including a hit Off-Broadway production in 2001, and now that show’s 25th-anniversary production is coming to Oceanside.

Directed by author Gayden Wren and music-directed by Stephen O’Leary—the same team that helmed the 2001 Off-Broadway production hailed by The New York Times as “Extremely funny … Sure to warm more than one cold heart” and by The New Yorker as “The old tale newly interesting—and a lot more fun”—the 25th-anniversary production will be seen at the First Presbyterian Church of Oceanside on Sunday, December 15, at 3:00 p.m.

A Gilbert & Sullivan Christmas Carol is a retelling of Charles Dickens’ classic tale of redemption with book and lyrics by Wren, set to music from the Gilbert & Sullivan operas.  What does that mean?  Well, anyone who’s seen The Mikado or The Pirates of Penzance will recognize “Three Little Maids from School” and “I Am the Very Model of a Modern Major-General” in “Three Little Ghosts for Scrooge” and “I Am the Very Model of the Mystic Supernatural.”

Presented by the Gilbert & Sullivan Light Opera Company of Long Island, the same company that presented the world premiere in 1994, the 25th-anniversary production features S.E. Holliday as Bob Cratchit, Laurie Baach as Emily Cratchit, Catherine Diakou as Tiny Tim, Christian Jurak as the Ghost of Marley, Darby Maxwell as the Ghost of Christmas Past, Sydney Matuszak as the Ghost of Christmas Present, Delaney Page as the Ghost of Christmas Yet to Come, Jonathan Quarant as Young Scrooge, Richard Risi as Young Marley, Kara Vertucci as Belle, Joseph Weitekamp as Fred, Kenneth Kopolovicz as Mr. Goodman and Karina Vartanian as Cheapside Jackie.  Hannah Roth plays Belinda Cratchit and Olivia Maio plays Peter Cratchit, with Isabella and Noah Mulcahy as Sarah and Simon Cratchit; Stanley Bergman and Nan Magna play Uncle Tim and Aunt Eadie.  Martin Fuller is the narrator and Thomas Z. Shepard the pianist.

This is the fourth time Wren has directed A Gilbert & Sullivan Christmas Carol, but the first time he’s ever played a role onstage—and it’s Ebenezer Scrooge, no less.

“It’s an iconic role, no matter what form the story takes,” Wren said.  “There’s a little Scrooge in any director.  Anyway, I’m honored to follow in the footsteps of our previous company Scrooges, Phil Gellis and Michael Economos, not to mention Mr. Magoo and Scrooge McDuck.”

A Gilbert & Sullivan Christmas Carol has been seen around the world, with productions in Australia, Canada, England, New Zealand, Wales and even Macedonia, as well as in Baton Rouge; Binghamton, N.Y.; Boston; Denver; Kansas City; Kilauea, Hawaii; Madison, Wisc.; Philadelphia; Rochester, N.Y.; Silver Spring, Md.; Topeka, Kans.; Wilmington, Del.; and many others, and now it’s coming to Oceanside for one night only. 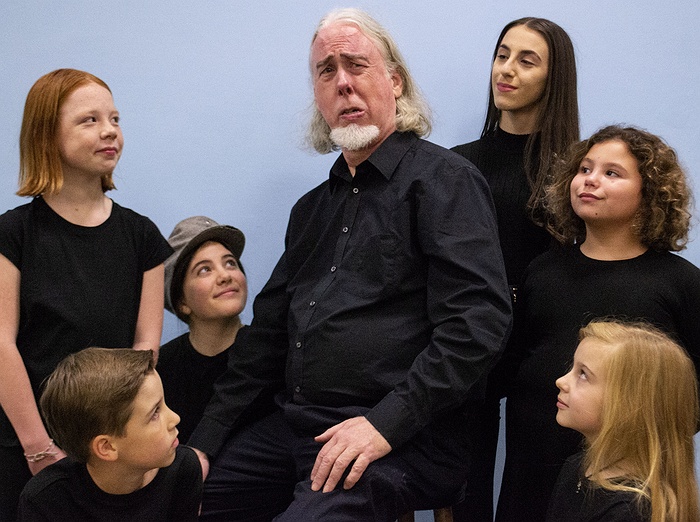