08:00 PM
Sun, Sep 06, 2015
Cost:    $25 |  $30 |  $35 |  $50
Description
Celebrating Their New Album: “Somewhere Down The Road”
Teddy Andreadis, J.D. Andrew, Brad Davis and Billy Bob “Bud” Thornton make up “The Boxmasters”; an American roots-rock band of seasoned musicians whose sound is rich in rhythm and story.
Formed in 2007, the band released the self-titled debut record “The Boxmasters” to critical acclaim. This two-CD set was comprised of original songs – including the Americana Radio hit “The Poor House” – and eclectic covers of tunes by The Beatles, The Nitty Gritty Dirt Band, Mott The Hoople and Mel Tillis.
After touring the country in 2008, The Boxmasters released a Christmas album – “Christmas Cheer” – and by April of 2009 had released their third album – “Modbilly” (a term that they coined as their style of music which was influenced by 60’s British mod music and influences from Southern American music, both pop and country)– which was yet another double album that spun to the top of the Americana charts for two weeks. “Modbilly” later was ranked #14 on the 2009 Americana Music Association’s Top 100 Albums of The Year.
The Boxmasters are back with a new album – “Somewhere Down The Road” – slated for release in the Spring of 2015, along with an aggressive tour schedule that kicks off with a slew of LIVE performances from Texas to Tennessee and throughout the South.
Doors open at 7:00pm
Show begins at 8:00pm 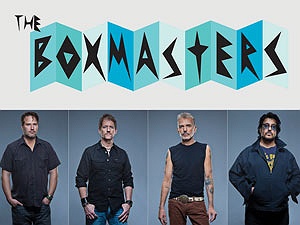