After the success of its inaugural event in June 2013 ETERNAL CON (The Long Island Comic Con) returns with a huge 2-day extravaganza June 14 &15 2014, taking place at the Cradle of Aviation’s Reckson Center, Garden City, NY.

This year’s celebrity guests include Rebecca Mader (star of the hit ABC tv series “Once Upon a Time” and LOST), the original Red Power Ranger Steve Cardenas, Zach Galligan (star of Gremlins), Catherine Mary Stewart (Star of The Last Starfighter and Weekend at Bernie’s), WWE wrestler Mick Foley, Tiamak (star of the Last Dragon), Paris Themmen (star of Willie Wonka and the Chocolate factory), with more guests to announced in the coming weeks.

On Sunday Jun 15th, in honor of Father’s Day, ETERNAL CON presents Kids day! The entire day will feature special events for children including “Youngling Training” where children are invited to join the NY-Jedi instructors in a supervised training session to learn basic Light Saber choreography & technique. Every child who participates will receive a free lightsaber!

New for 2014 is the COSPLAY PARADE. This FREE event is open to the public. The parade will begin at 9:00 am on Saturday June 14th and proceed along Charles Lindberg Blvd and lead into the Cradle of Aviation museums parking lot. More information on the parade is available on the ETERNAL CON website.

One of the biggest events in 2013 was the Costume Contest in the 300-seat IMax theatre.  This year’s event will be pre-judged by Sue Lee (Star of the popular SYFY series Face-Off) and comic book superstar artist Amanda Conner. This live event will be simulcast on the IMax screen so everyone in the theatre gets a good look at all the costumes. The contest is open to all cosplayers and fans.

Again this year ETERNAL CON will help raise money for several worthy charities working in the local community including The Ronald McDonald House of Long Island, Hurricane Sandy Relief, and The Special Olympics (to be confirmed). In addition, Long Island Blood Services will be in attendance and will be conducting a special blood drive. ETERNAL CON will also be supporting the fundraising efforts with a series of charity auctions and a portion of the ticket sales from “Cosplay Night” at CitiField on June 12th presented by Eternal Con.

Throughout the weekend attendees will have the opportunity for Portfolio Reviews, Gaming tournaments, informative panels (such as the Women in Comics panel), the return of the Planet of the Apes movie prop gallery, a Car Show (with the 1966 Batmobile and many other cars from movies and television), a expanded Art Show, Cosplay groups, special performances, and a vendor room with over 150 tables of toys, jewelry, clothing, and collectibles. 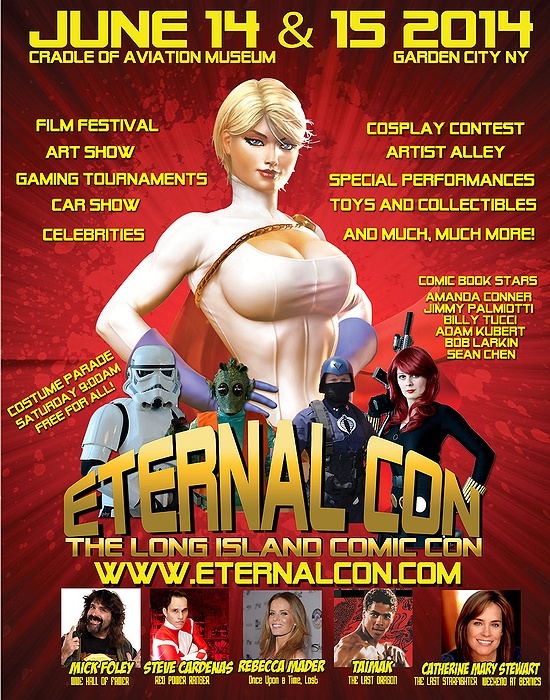