"Curated by Yousuf Saeed, an independent filmmaker and researcher based in India, From Mecca to Sufi Shrines showcases the ephemeral objects and devotional art produced for popular consumption in the Islamic world, in particular in South Asia. Included are mass-printed Islamic posters and calendar art from India and Pakistan, which often depict images of the Hajj pilgrimage; South Asian Sufi shrines and saints; and calligraphy and talismans linked to other religious faiths found in the region.

From Mecca to Sufi Shrines raises the question of why such vibrant visual cultures continue to thrive in the South Asian Islamic world despite the skepticism and suspicion of Islamic authorities on popular art’s legitimacy, as well as why images and popular culture are inevitabilities for popular piety despite orthodox Muslims’ increasing dissociation from them." 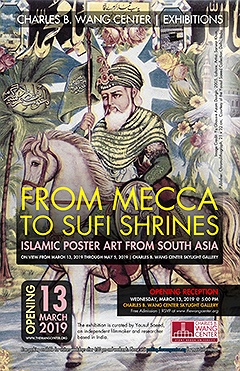