Goat On A Boat Presents "Judy Saves The Day"

11:00 AM - 01:00 PM
Sat, Mar 14, 2020
Cost:    15/20
Description
After being pushed around for over 200 years, the famous hand puppet heroine Judy has had enough! Cheer her on as she goes on a quest for respect, justice, and a well-deserved nap. This modern interpretation of the traditional "Punch and Judy" show is a hilarious, timely, hand-crafted farce that the whole family will enjoy. Recommended for ages 4 and up
About the Artist
Sarah Nolen became Puppet Showplace Theater's third-ever resident artist in September 2017. Her shadow adaptation of the Baba Yaga story, Lisa the Wise, debuted in October 2017 as part of the Fall Fairy Tale Festival. Since coming on board at Puppet Showplace, Sarah has debuted two new shows: The Fairy Tailor in February 2018, and Judy Saves the Day in January 2019. Sarah stays busy teaching camps and classes for all ages pre-k to adult, consulting on puppetry projects for theaters and cultural institutions, and running the theater's "Hatchery" program for new works development.
Known for her versatile, witty, and innovative work across multiple puppetry styles, Sarah most recently worked as a builder for Acheson Walsh Studios and performer for the immersive show Pip's Island in New York City. She has also toured internationally as part of the ensemble for Reverse Cascade.
Originally from Austin, Texas, Sarah earned her BFA in film from Southern Methodist University in 2009, and MFA in Puppet Arts from the University of Connecticut in 2016. Sarah has performed as a puppeteer for the Boston Pops Orchestra, EnvisionFEST Hartford, and The Out of Bounds Festival in Austin. In addition to her work in puppetry, Sarah is an experienced filmmaker and comedy improv performer. 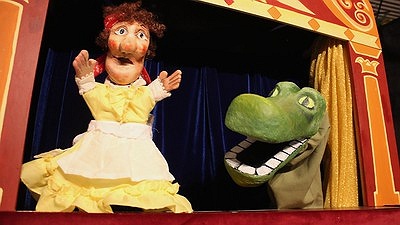