“The most powerful loved, and hated film critic of her time.” – Roger Ebert on Pauline Kael (1919-2001).  A portrait of the work and life of controversial film critic Pauline Kael, and her battle to achieve success and influence in the 20th-century movie business. In a field that has historically embraced few women film critics, Kael was charismatic, controversial, witty, and discerning. Her decades-long berth at The New Yorker energized her fans and infuriated her detractors every week. Sarah Jessica Parker reads from Kael’s reviews; filmmakers Quentin Tarantino, Paul Schrader, and Francis Ford Coppola and critics Camille Paglia, Molly Haskell, Greil Marcus, and David Edelstein speak to her enormous gifts and influence.

“Pauline seemed to love what she did so much more than anyone else,” Director Rob Garver says. “When I first read her, her voice leapt out at me -- insightful, honest, funny, sometimes infuriating, but above all, fun. She felt joy, and that came through. I wanted to make a movie that conveyed all those things, and told the story of a great cultural era through her wonderful eye.”

“What She Said: The Art of Pauline Kael” is available starting on Monday, May 4 and runs through May 31. Ticket price for the screening is $12. For more information please visit www.goldcoastarts.org. 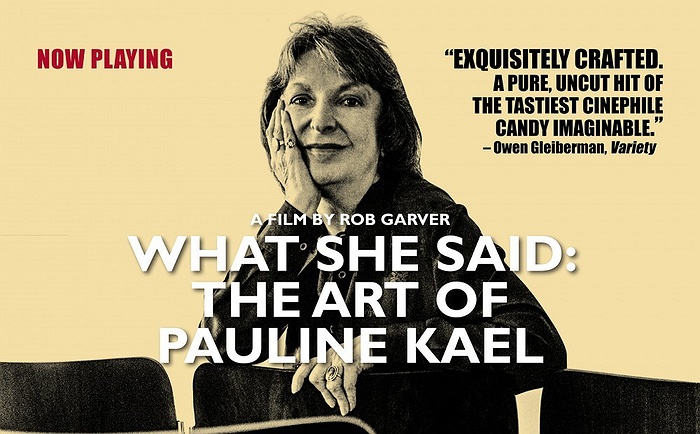