2016 is upon us, so ring in the New Year at Bistro 72!
We have a special evening planned with an amazing roster of musicians to help us bid farewell to 2015.

There are two seating times, 5pm and 8pm.

From 5pm-8pm, local pianist Arthur Pitts will entertain us on the baby grand piano, with favorites from his Great American Songbook.

From 8pm-1am, Jesse Barnes & Friends will perform, and this year his friends include Lauren Henderson, one of the best young jazz vocalists in NYC, and Sylvester Onyejiaka on tenor sax. Sylvester is a talented horn player, who you might have caught playing alongside Taylor Swift in Times Square.  Most recently, he’s been working on an orchestral tribute to prepare for an epic evening.

That is just a sampling of the music for the evening, and there will of course be a Champagne toast at Midnight.

Our New Year’s Eve menu features a four course meal, guaranteeing that your first meal of 2016 will be just as epic as the evening. The dinner is $75 per person, with tax and service not included.

After rocking out through the night on New Year’s Eve, wake up from a restful night’s sleep at Hotel Indigo, or stop by after your night out elsewhere.  We have a New Year’s Day brunch menu (a la carte) to start your first day of 2016 in a great way. Someone pass the eggs and Bloody Marys! 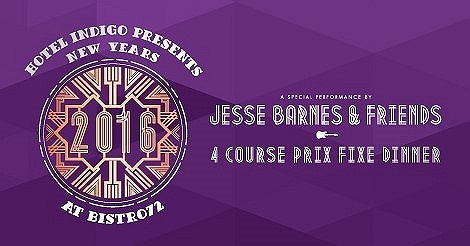