The Illuminations exhibition kicks off William Ris Gallery’s Fall 2018 season, and who better than with the Gallery’s neighbor, Max Moran, whose studio atelier is located behind the Gallery. “Max and I moved into our respective spaces just a month apart almost three years ago,” explains gallery owner Mary Cantone who has admired Moran’s works for years, adding, “I like to think we’ve become an art destination as a result.”

Born and raised in Ohio, Moran’s career has spanned over forty years starting as a teen commissioned to paint portraits, with stays in Paris, Ireland, Mexico and California as he painted everything from portraits to landscapes to urban life, before heeding the call to the East Coast and eventually opening his studio in Manhattan’s East Village in the ‘90s. A visit to Greenport, Long Island led to Moran’s move to the North Fork nearly a decade later in 2000 with the opening of a studio near Martha Clara’s Vineyards where he often exhibited his works. Asked what prompted the move, Moran responds, “I’d developed relationships in the North Fork and also realized that it had the same inspiring ingredients like Cape Cod that didn’t entail having to travel the whole day to get out there.” Today, Moran’s landscape paintings of the North Fork are some of the most notable plein air works depicting both a tradition in art as well as the beauty of its subject. “North Fork landscapes have a certain atmosphere, a visual narrative that nourishes the soul,” muses Moran. “I think we all have the ability to see and appreciate landscape artwork not just because it’s recognizable as a particular landmark that’s familiar, but I think it triggers a sense of celebration for our existence. It’s ageless.”

Illuminations marks Moran’s 16th solo exhibition on the North Fork to date as he unveils his new line of cloudscape paintings, working on the concept of cloud stacking with an amalgamation of cloud movements and formations at four different times of the day. “As a kid, I always had my nose up against the window looking out at the clouds. I’m tapping back into that nostalgia, and still have the same feeling and awe.” It takes a special artist to look beyond the ordinary to find a spark of joy of that moment, a unique capture of the subtleness that is nature and life, and to express it onto canvas. “It’s visual opera,” Moran says of the clouds. That visual opera is also his paintings. 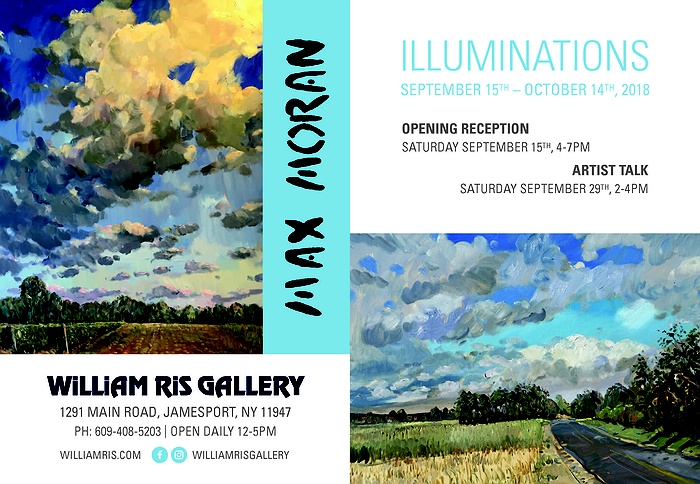