“Ken Ludwig’s Baskerville: A Sherlock Holmes Mystery” will be the first play of the Hampton Theatre Company’s 2019-2020 season, opening on October 24 at the Quogue Community Hall and running through November 10.

The play’s afoot in Ken Ludwig’s transformation of Arthur Conan Doyle’s “The Hound of the Baskervilles” into a murderously funny adventure. Ludwig, the master of comedy who created such HTC hits as “Lend Me a Tenor” (1993), “Moon Over Buffalo” (2008) and last season’s “Comedy of Tenors,” has Sherlock Holmes investigating the fatal curse afflicting the male heirs of the Baskerville line.

In the search for the ingenious killer, Holmes and Watson must try to sort out a dizzying web of clues, silly accents, disguises, and deceit as three actors in the cast of five deftly portray some 40 characters.

A reviewer for Broadway World proclaimed that “the joy is not in solving the crime but in the plethora of wildly imaginative characters you meet along the way … a play that is ingeniously funny and will keep you guessing until the curtain call."

Ken Ludwig is a two-time Olivier Award-winning playwright whose work is performed throughout the world in more than 30 countries and at least 20 languages. He has written 25 plays and musicals, with six Broadway productions and seven in London’s West End. His first Broadway play, “Lend Me A Tenor,” won two Tony Awards and was called "one of the classic comedies of the 20th century” by The Washington Post.

The cast of the HTC production of “Ken Ludwig’s Baskerville” features four HTC veterans: Andrew Botsford as Actor Two; Matthew Conlon as Sherlock Holmes; Tina Jones as Actress One; and Ben Schnickel as Actor One. Duncan Hazard, a newcomer to the HTC stage, has the role of Dr. Watson.

The Hampton Theatre Company is offering special dinner and theater packages in collaboration with the Westhampton, Southampton, Hampton Bays and Quogue libraries. A special lunch and theater package is also available for the Saturday matinee on November 9, with lunch before the show at the Quogue Club at the Hallock House. Discount tickets are available for veterans, Native Americans, under 35, students, and groups. For reservations and information on all packages and available discounts, visit  www.hamptontheatre.org or email info@hamptontheatre.org. 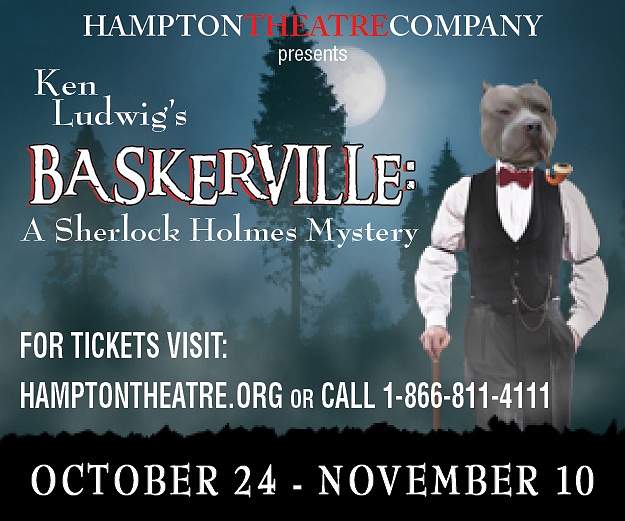