Rescheduled to May 20th from March 26th

Experience the hit songs from Meat Loaf performed brilliantly by his band The Neverland Express plus American Idol winner Caleb Johnson. The Neverland Express includes world-class alumni spanning the history of the Meat Loaf legacy. In addition to a #1 album and touring with some of the biggest names in rock, Caleb Johnson is the winner of American Idol season 13. He delivers his own unique stamp to such classics as “Bat Out of Hell”, “Paradise By the Dashboard Light”, and “I Would Do Anything for Love” while staying true to the essence of Meat Loaf’s delivery. The show is presented by Grammy Award winner Meat Loaf and produced by his musical director/guitarist/record producer Paul Crook. 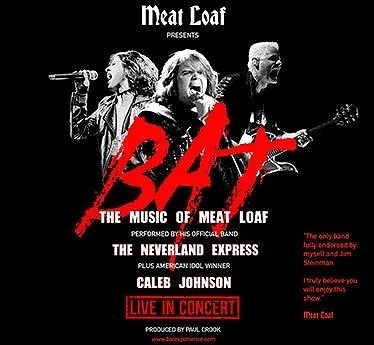