ANDREW DICE CLAY is proud to be one of America’s most controversial and outrageous comics. When he released his debut album, Dice, the parental advisory label simply read “Warning: This album is offensive.”

Clay’s rise to fame was nothing less than meteoric; he became the first comedian to sell out Madison Square Garden two nights in a row and was the only performer ever “Banned For Life from MTV.”

Over the last few years, Clay’s career has experienced a resurgence, most notably when he starred to great critical acclaim alongside Cate Blanchett and Alec Baldwin in Woody Allen’s Blue Jasmine, his recurring role on the final season of Entourage and Martin Scorsese’s Vinyl. His other notable TV credit is The Celebrity Apprentice, where he is proud to have been the first celebrity thrown off the show.

Clay has released numerous best-selling DVDs (No Apologies  and  Dice Rules!) and a string of multi-gold and platinum selling CDs (The Day The Laughter Died and Face Down, Ass Up). Dice also starred in several one-hour HBO  and  Showtime stand-up specials including: The Diceman Cometh and Indestructible.

You can see Andrew Dice Clay on Sunday nights in the second season of his Showtime series, Dice. In 2018, you saw him alongside Bradley Cooper & Lady GaGa in “A Star Is Born”.


Comedy superstar, award-winning actress, best-selling author, 2012 presidential candidate and the original domestic goddess, Roseanne Barr, continues to amaze. After nine years, 224 episodes, four Emmy® Awards and countless other accolades, she single-handedly re-landscaped the medium of situational comedy forever. Her creation and stark portrayal of Roseanne Conner and the Conner family on ABC’s “Roseanne” has been hailed as “the most groundbreaking kitchen-sink sitcom since ‘All in the Family,’” (Entertainment Weekly) adding, “she’s the funniest disturber of peace that we have.”

She began her career as a stand-up comedian, turning her experiences as a wife and mother into a hilarious comedy act that audiences couldn’t resist. She subsequently produced and starred on her own hit sitcom, “Roseanne,” which ran for nine seasons and averaged a staggering 30 million viewers each week. The role earned Barr an Emmy Award, a Golden Globe® Award, the prestigious Peabody Award, a Kids’ Choice Award and multiple American Comedy Awards. 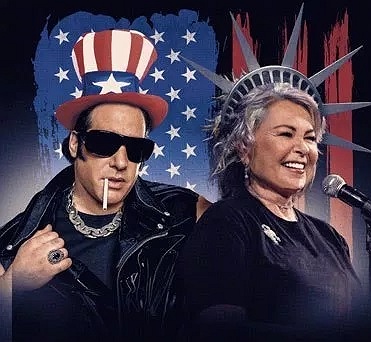