Winner of the Pulitzer Prize and Best Play Tony Award, Neil Simon’s "Lost in Yonkers" opens October 16, 2014, for 10 performances over three weekends at Bare Bones Theater in Northport, NY.  The plot is set against the backdrop of America’s involvement in World War II.  Bella is middle-aged, mentally challenged and living at home with her stern and imposing mother, Grandma Kurnitz.  As the play opens, ne'r do-well son Eddie deposits his two young sons on the old lady's doorstep.  A widower and deeply in debt, Eddie is taking to the road as a salesman. The boys are left to contend with Grandma, with Bella and her secret romance, and with her brother, Louie, a small-time hoodlum in a strange new world called Yonkers.  The arrangement is a catalyst for a long-over-due confrontation laced with natural humor and honesty.  Newsweek declared, "Laughter and tears have come together in a new emotional truth. There are moments in this play when you experience a new kind of laughter for Simon, a silent laughter that doesn't explode into a yuk but implodes straight into your heart."   Performance dates: Thursday-Saturday, October 16-18 at 8 PM; Friday, Saturday, October 24, 25, 31, November 1 at 8 PM; Sunday matinées, October 19, 26, November 2 at 3 PM.  Directed by Jeff Bennett; Assistant director: RJ Meyer; Producer: Caitlin Esposito. 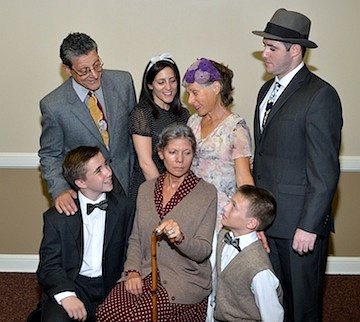