Hooks & Chops, a new restaurant featuring specialties from both the land and sea has officially opened its doors. Brought to you by Executive Chef and Operator Steven Del Lima, Hooks & Chops moves into the space formerly occupied by Ruby Tuesdays located at 6330 Jericho Turnpike in Commack, New York. Steven has spent years working at some of Long Island’s most prestigious seafood restaurants including RSVP, which was rated “Best Seafood Restaurant on Long Island” in 2015 by Zagat and Wild Fin Restaurant which received a 3 star review from The New York Times. Del Lima spent some time sharpening his culinary skills at Off the Wall in Huntington, later transformed into Black & Blue Seafood Chophouse and Perfecto Mundo Latin Fusion Bistro in Commack which received a 3 star review from Newsday. Del Lima also helped transform Piccolo Mondo which received 3 stars from Newsday, and many other notable mentions such as #1 in Italian on Long Island and was one of Newsday’s Top 10 Fine Dining Restaurants on Long Island.

Del Lima is putting his spin on the ordinary steakhouse and has remodeled the space into his rendition of a seafood chophouse. Housed in a 5,000 square foot building, the interior is “chic coastal” with a modern vibe. Slate blue walls are featured while White Washed Ship Lap is evident on walls throughout the restaurant. The bar is made of absolute black granite and Komorebi Rainforest Dew glass tile is displayed behind the bar. Large industrial light fixtures are hanging and large windows are prominent allowing plenty of natural light. Art provided by Farmingdale’s Cambridge Art & Framing is highlighted along with metal hooks and cleavers. The epoxy floor features shades of blue-and-gray porous concrete and provides a high-performance surface that’s shiny, smooth and durable. 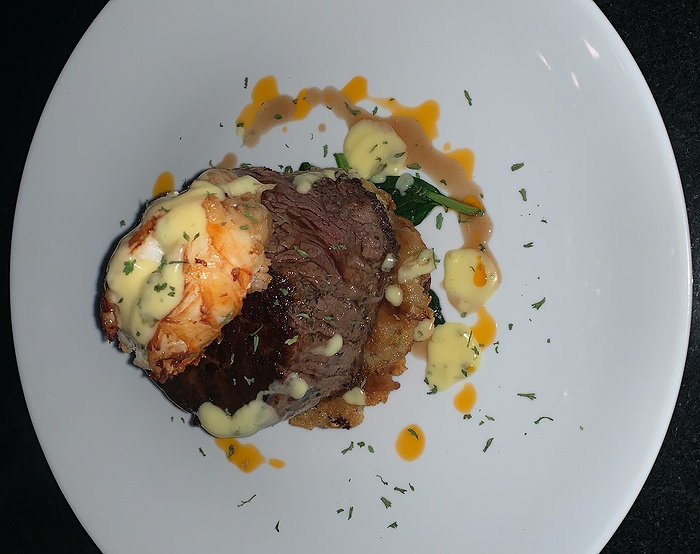