Can you think of a better place to spend New Year's Eve than New York City? On this special day thousands of people flock to the city from around the world to be a part of the many attractions in Manhattan. While upper-echelon nightclubs, exclusive hotel lounges, and top-notch rooftops are filled with dancing bodies for the last day of the year, perhaps the most popular area of all is Times Square - the location of the famous ball drop. But there's one characteristic that each one of those attractions shares that's not so enticing - the crowds. This upcoming New Year's Eve in New York City, opt for a memorable experience aboard what's considered the most popular yacht off of Manhattan's coast - the Infinity Yacht. We're sure you heard about last year's event, and if you weren't lucky enough to get access to it here's your chance.

This magnificent ship is a phenomenon of the seas and known around New York City as a sign of elegance and sophistication. It's not everyday that you get a 210-foot yacht that welcomes up to 1,000 of the city's elite to come aboard and enjoy the regal amenities on hand. At first glance, what gets ones attention are the multiple levels - three climate-controlled decks that feature custom LED lighting, state-of-the-art sound systems with flat screen monitors, and dance floors for the music at hand. The lucky guests aboard this gorgeous vessel will have the great opportunity to access four hours of premium open bar and a special champagne toast at midnight.There will be mouth-watering cuisine provided at various buffet stations, ensuring that your New Year's Eve appetite is satisfied.

One of New York City's most prominent DJs will be on hand delivering sounds throughout the voyage. While you'd think that things couldn't get any better, you'll have the best vantage point of the popular and highly sought after New Year's Eve fireworks display high above the city. There's no denying that this will be a premiere attraction on the biggest day of the year in New York City. Here's your chance to be a part of it, so get your tickets while you still can! 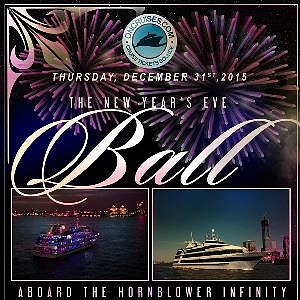