at Harborfront Park | Tue May 04

07:30 PM - 09:30 PM
Tue, May 04, 2021
Cost:    $10 Advance Tickets or at the "door" (No credit cards |  please at screening)
Description
Advance Sale at: portjeffdocumentaryseries.com/ticketsvenues or tickets at the "door" as available.
(All health protocols will be followed. Bring your own chairs.)
Directed by Lisa Immordino Vreeland,
TRUMAN AND TENNESSEE: AN INTIMATE CONVERSATION is a story of two of the greatest writers of the past century examined in a dialogue that stretches from their early days of friendship to their final, unsparing critiques of each other. Truman Capote and Tennessee Williams lived parallel lives and struggled with a lifelong pursuit of creativity, self-doubt, addiction, and success. Giving life to the dialogue and a physicality to their relationship, Jim Parsons is the voice of Capote and Zachary Quinto is the voice of Williams. .
Running Time: 86 Minutes
*Please be aware that due to a conflict with Port Jeff Village scheduling, this screening will take place on Tuesday night.
Q&A via link to especially pre-recorded Zoom for PJDS with director Lisa Immordino Vreeland, moderated by Tom Needham, host of Tom Needham’s The Sounds of Film on WUSB radio.

Tickets $10 (Limited seating, so purchase tickets early!)
Advance Sale at: portjeffdocumentaryseries.com/ticketsvenues or at the "door" as available.
RAINDATE: NEXT DAY @ 7:30PM
The Port Jefferson Documentary Series is under the auspices of the Greater Port Jeff-Northern Brookhaven Arts Council and graciously sponsored by the Suffolk County Film Commission. 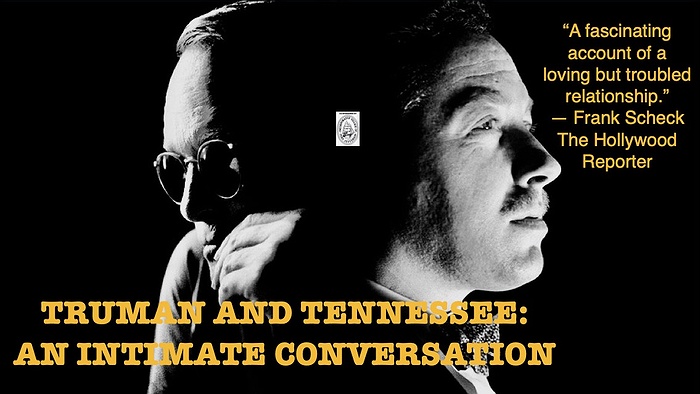