07:00 PM - 09:00 PM
Cost:    $12.00 online or at the screening (no credit cards)
Description
SPECIAL EVENT! PARTY IN THE PARK!
Advance Tickets $12 at: portjeffdocumentaryseries.com/ticketsvenues - TICKETS ON SALE NOW!
Please join us on April 26 for a special event to celebrate “PJDS Arts in the Park” and to applaud Port Jeff Village’s resilience during the past year. Co-sponsoring with Mayor Margot Garant and Port Jeff Village, we will gather outdoors for a unique evening of laughter and insight. We will also be holding a raffle to win gift certificates to several Port Jefferson Village shops and restaurants before the screening of HOWIE MANDEL: BUT ENOUGH ABOUT ME.

HOWIE MANDEL: BUT, ENOUGH ABOUT ME is raw, funny and touching! An intimate and provocative documentary, the film explores the life and career of Howie Mandel, a veteran comedian, actor and producer, arguably most known for his battle with OCD and for being a judge on America’s Got Talent rather than for his considerable comedic genius. The film delves into his early years in the comedy industry and how he became a star on one of the most beloved television series ever, St. Elsewhere. We follow Howie on the road while he performs over 200 stand up performances each year, going behind-the-scenes at AGT, and enjoying personal time with his family. The film also explores his personal struggles with OCD. Through powerful on-stage moments, interviews and archival footage of his early performances – we discover how Howie emerged from being a carpet salesman to become one of the most famous and paradoxically approachable performers in the world.
Running Time: 88 Minutes
All ticket holders will receive a link to watch a Q&A with director Barry Avrich.
Moderator for the Q&A: Tom Needham, host of Tom Needham’s The Sounds of Film on WUSB.
Tickets $12 (Limited seating, so purchase tickets early!)
Advance Sale at: portjeffdocumentaryseries.com/ticketsvenues or at the "door" as available.
The Port Jefferson Documentary Series is under the auspices of the Greater Port Jeff-Northern Brookhaven Arts Council and graciously sponsored by the Suffolk County Film Commission. 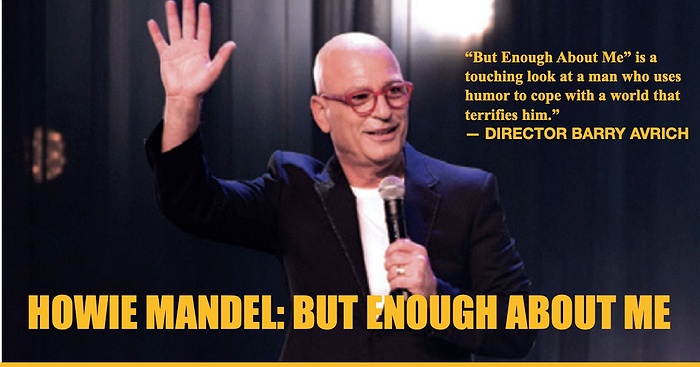