Liz Atz’s work evolved from her experimental interdisciplinary approach to process, material, and abstraction. She mines the materials of consumer culture to create painting, drawing, installation, and photography. Her recent work employs plastics, textiles, and other materials acquired from dollar stores and industrial sources.

Chris Bors’ post-Pop conceptual paintings feature mash-ups of images in which anything visual is fair game for repurposing. He works with bold graphics and text, commenting on commodification, trash culture, and personal obsessions. .

Jude Broughan presents three large loose-hanging works and two smaller mixed-media panels that reveal her interest in travel and its resultant instability of place. Broughan draws on the languages of painting and printmaking alongside those of photography and collage to play with space and form, line and color.

An alumnus of SUNY Old Westbury, Michael Capobianco offers Hard, Shrunken, and Plush, a new series of mundane objects that have been crushed, coated, and condensed to be fossilized and preserved for future generations. These "trapped-in-amber" objects question the real and imagined relationship between the viewer and the artifacts of our shared cultural history.

Lizzy De Vita works in performance, text, sound, drawing, installation, video, and sculpture unified by her interest in “viral moments” where interpersonal boundaries are blurred. De Vita will present Edging (2015), a video of a manicurist painting the nails of a client in a scene that takes an unexpected turn to make the viewer re-examine the relationship between client and low-paid personal services worker.

Brooklyn-born Egyptian-American Anthony Hamboussi presents “Arab Republic of Egypt,” a photographic project documented in Egypt between 2009 and 2016. This series of street photographs was made within the framework of the “state of emergency” under which Egyptians have lived for most years since 1956.

Korean-born Hong Seon Jang, known for his sculptural installations, will present Ghost (2018), an ivory tusk in a Plexiglas box made of Ivory soap bars and a wooden pallet, representing the paradoxes of the marketplace.

Maxine Montilus founded MV Dance Project, which had its debut at Brooklyn Studios for Dance in 2019 with its first evening-length work "Strength in Spirit".  In 2017, Montilus served as the Afro Cuban/Haitian Folklore consultant to choreographer Camille A. Brown for the Tony-winning musical “Once On This Island.” 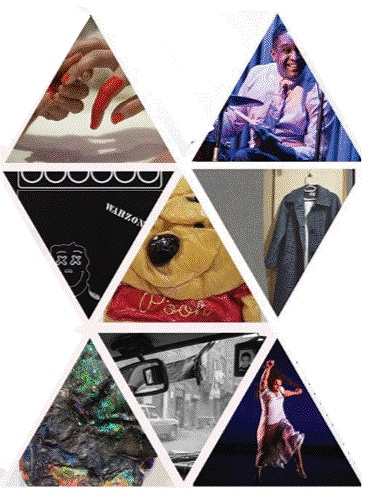