The Paramount in downtown Huntington, Long Island welcomes back Social Distortion for a second time on September 5th at 8 pm. This powerful foursome is made up of front man Mike Ness, longtime guitarist Jonny Wickersham, bassist Brent Harding and drummer David Hidalgo Jr. Their latest album, Hard Times and Nursery Rhymes, is the band’s first record since 2004, but their hiatus hasn’t altered the chemistry their fans once latched onto.

Tickets for Social Distortion will go on sale to the general public starting @ 10am on Friday, June 13th through Ticketmaster.com, charge-by-phone @ 800-745-3000 or The Paramount Box Office (open daily from 12 noon - 6 pm). Paramount Fan Club members may purchase tickets before the general public during the two-day, online-only, Ticketmaster pre-sale starting at 10am on Wednesday, June 11th through 10pm on Thursday, June 12th with password "PULSE". To receive future pre-sale codes and event news for The Paramount, simply sign up on our website for our FREE e-newsletter today.

On the album Hard Times and Nursery Rhymes, Social Distortion stretches the boundaries of their signature sound. The band’s front man Mike Ness said, “With this record I wanted to go a little further. I wanted people to hear that second track and realize, ‘Wow, this is not just another Social Distortion record.’” In fact, this is the first record that the band included female backing vocals on their tracks. Their ability to evolve has allowed them to become successful and remain relevant in a business that constantly changes. Social Distortion has concocted the perfect blend of punk, bluesy rock n’ roll and outlaw country making them the ideal way to end the summer; so celebrate the last hurrah at The Paramount on September 5th. 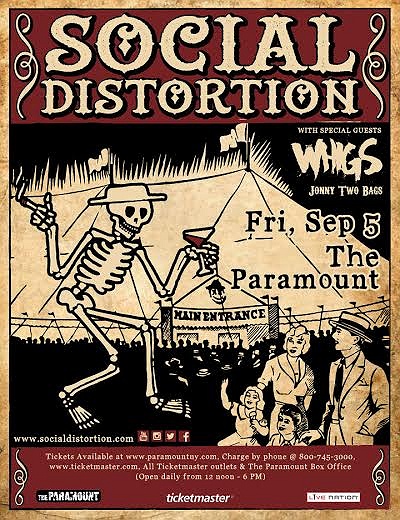