For decades, Oliver Sacks, M.D. captured the imagination of the public with his eloquently written case studies of cognitive disorders. Despite sharing with the world one revelation after another about the intricacies, idiosyncrasies, and amazements of the human mind, Sacks remained private for much of his life, specifically about his struggles growing up gay in the repressive England of the 1950s. In Ric Burns’s fascinating and intimate documentary, partly shot before Sacks’s death in 2015 and featuring extensive scenes with the man himself, we get to know Sacks, from his childhood years with a schizophrenic older brother, to his years as a champion bodybuilder and motorcycle aficionado, and to his remarkable accomplishments as one of our foremost neurologists. His groundbreaking work on patients with the sleeping sickness encephalitis lethargica became the basis for his book Awakenings, and the memorable, award-winning film, AWAKENINGS starring Robin Williams. Burns’s documentary is a fitting and moving tribute to a man who never stopped wondering what it was like to be in the head of another sentient being. OLIVER SACKS: HIS OWN LIFE was the recipient of the Audience Award for Best Documentary at the 2019 Hamptons International Film Festival. Running Time: 110 minutes

Guest Speakers via Pre-Recorded Zoom with director Ric Burns, moderated by Tom Needham, host of Tom Needham’s The Sounds of Film of Film on WUSB radio. TICKETS, $12, WILL BE AVAILABLE FOR PURCHASE ON OUR KINO MARQUEE PLATFORM STARTING ON 9/29 UNTIL 10/3 WITH 5 DAYS TO WATCH FROM TIME OF PURCHASE. https://kinomarquee.com/film/oliver-sacks-his-own-life/5f331d779759290001908a00/port-jefferson-documentary-series You may go to the page now to find out more info about the film and to find out the ways to watch. 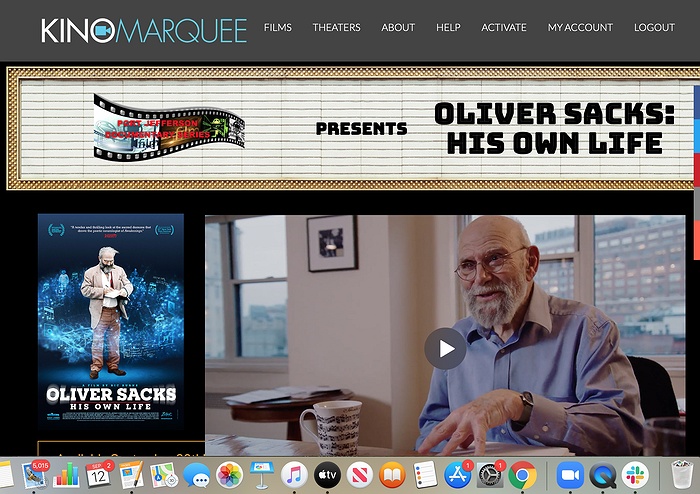