“Sylvia” by A.R. Gurney will be the third play of the Hampton Theatre Company’s 2019-2020 season, opening on March 19, 2020 at the Quogue Community Hall and running through April 5.
Because the play deals affectionately with issues related to animal adoption/rescue, the HTC is dedicating the dress rehearsal at 7 p.m. on Wednesday, March 18, to a benefit for the Southampton Animal Shelter Foundation. For more information on the benefit or to buy tickets, visit southamptonanimalshelter.com.
In this romantic comedy about a marriage and an adopted pet, a sassy stray dog (played by a human) is brought home from Central Park and becomes a major bone of contention for empty-nesters Greg and Kate. A street-smart mixture of Lab and poodle, Sylvia offers Greg an escape from the frustrations of his job and the unknowns of middle age. While Kate considers Sylvia a rival for Greg’s affection, Sylvia sees Kate as clueless about the bond between man and dog. After a series of hilarious and touching complications, all three learn lessons about the importance of compromise and the power of love.
Originally produced Off-Broadway in 1995 with Sarah Jessica Parker as Sylvia and Blythe Danner and Charles Kimbrough as Kate and Greg, “Sylvia” has been widely produced in regional theatre, including by the Hampton Theatre Company in 1998. The play made its Broadway debut in 2015 with Annaleigh Ashford as Sylvia, Matthew Broderick as Greg, and Julie White as Kate.
A.R. (Albert Ramsdell) Gurney Jr. (1930 – 2017) was an American playwright, novelist and academic. Occasionally credited as Pete Gurney, he is known for works including “The Dining Room” (1982), “Sweet Sue” (1986/7), and “The Cocktail Hour” (1988), and for his Pulitzer Prize nominated play “Love Letters.” His series of plays about upper-class WASP life in contemporary America have been called "penetratingly witty studies of the WASP ascendancy in retreat."
In addition to “The Dining Room” (in 1990 and 2000) and “Sylvia,” other plays by A.R. Gurney produced by the Hampton Theatre Company include “Love Letters,” “Later Life,” and “Black Tie.”
The cast of the Hampton Theatre Company revival of “Sylvia” features four HTC veterans: Edward Kassar (“Lost in Yonkers,” “Glengarry Glen Ross”) as Greg; Catherine Maloney (“A Comedy of Tenors,” “The Boys Next Door”) as Kate; Amanda Griemsmann (“A Comedy of Tenors,” “Don’t Dress for Dinner”) as Sylvia; and George Loizides (“On Golden Pond,” “Alarms and Excursions”)  playing three separate roles.
Hampton Theatre Company Artistic Director Diana Marbury directs. Set design is by Sean Marbury; lighting design by Sebastian Paczynski; sound by Seamus Naughton; and costumes by Teresa Lebrun.
Following the SASF benefit dress rehearsal on March 18, “Sylvia" runs at the Quogue Community Hall from March 19 to April 5, with performances on Thursdays and Fridays at 7, Saturdays at 8 and Sundays at 2:30. An additional matinee performance will be offered during the final weekend of the production, on Saturday, April 4, prior to the regular 8 p.m. performance that evening. A talkback with the cast will be offered following the 7 p.m. performance on Friday, March 27.
The Hampton Theatre Company is offering special dinner and theater packages in collaboration with the Westhampton, Southampton, Hampton Bays and Quogue libraries. A special lunch and theater package is also available for the Saturday matinee on April 4, with lunch before the show at the Quogue Club at the Hallock House. Discount tickets are available for veterans, Native Americans, under 35, students, and groups. For reservations and information on all packages and available discounts, visit  www.hamptontheatre.org or email info@hamptontheatre.org. To reserve tickets, visit www.hamptontheatre.org, or call OvationTix at 1-866-811-4111.
All Upcoming Dates: 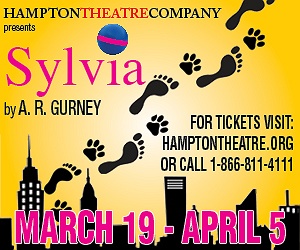