One Year Later,
“Sylvia” by A.R. Gurney
Opens May 27 in Quogue

More than a year after it was first scheduled to open, “Sylvia” by A.R. Gurney will be the Hampton Theatre Company’s first production at the Quogue Community Hall since all theaters in New York were shuttered on March 12, 2020 by order of Governor Andrew Cuomo in response to the onset of the coronavirus pandemic. The romantic comedy about the impact of adopting a stray dog on an empty-nest marriage opens on Thursday, May 27, and runs through June 13.

In accordance with the Governor’s guidance for small theaters, seating capacity will be limited for each performance to approximately 60 ticket holders, who will be required to wear appropriate face coverings while inside the theater. To ensure physical distancing, tickets will only be sold in advance through the company’s website, www.hamptontheatre.org, or by phoning the HTC box office at 1-631-653-8955. A complete list of HTC safety protocols may be found at www.hamptontheatre.org.

In “Sylvia,” a sassy stray dog (played by a human) is brought home from Central Park and becomes a major bone of contention for Greg and Kate. A street-smart mixture of (possibly) Lab and poodle, Sylvia offers Greg an escape from the frustrations of his job and the unknowns of middle age. While Kate considers Sylvia a rival for Greg’s affection, Sylvia sees Kate as clueless about the bond between man and dog. After a series of hilarious and touching complications, all three learn lessons about the importance of compromise and the power of love.

A reviewer for the New York Daily News wrote: "I can only call it one of the most involving, beautiful, funny, touching and profound plays I have ever seen.” Vincent Canby, in his New York Times review of the original 1995 production, wrote: "Dramatic literature is stuffed with memorable love scenes. But none is as immediately delicious and dizzy as the one that begins the redeeming affair in A. R. Gurney's new comedy, 'Sylvia’.”

The cast of the Hampton Theatre Company revival of “Sylvia” features four HTC veterans: Amanda Griemsmann (“A Comedy of Tenors,” “Don’t Dress for Dinner”) as Sylvia; Catherine Maloney (“A Comedy of Tenors,” “The Boys Next Door”) as Kate; and George Loizides (“On Golden Pond,” “Alarms and Excursions”) in three different roles. Adding a touch of mystery, the HTC has so far offered only one clue as to the identity of the actor playing Greg, noting that the role will feature “a familiar HTC face.”

Because of limited seating capacity under the Governor’s guidelines, the HTC has added two additional Saturday matinees to the company’s regular production schedule. “Sylvia" runs at the Quogue Community Hall from May 27 to June 13, with performances on Thursdays and Fridays at 7, Saturdays at 2:30 and 8, and Sundays at 2:30.

Discount tickets for “Sylvia” are available for veterans, Native Americans, seniors, patrons under 35, and students. For reservations and information on all available discounts, visit www.hamptontheatre.org or email info@hamptontheatre.org. 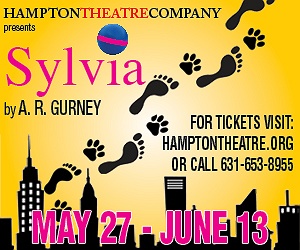