The Beatles’ White Album Live! with The Moondogs

08:00 PM - 09:30 PM
Sat, Dec 04, 2021
Cost:    30
Description
Having been faithfully covering the music of The Beatles for decades, The Moondogs in their current lineup performed their first live concert at Bay Street Theater in 2014, celebrating the 50th anniversary of The Beatles’ 1964 arrival in the United States.
Since that celebrated performance, their special, limited-edition, two-night shows have grown into a well-anticipated annual event.
In 2017 the band returned to perform Sgt. Pepper’s Lonely Hearts Club Band, and then again in 2018 to perform the music of George Harrison in celebration of his 75th birthday. Again, in 2019, the band joined Bay Street to perform both Let It Be and Abbey Road. Now, eager fans and Beatles fanatics will have the chance to hear their recreation of the wide-ranging masterpiece known as The White Album.
The Moondogs is made up of keyboardist Fred Gilde, guitarist Mick Hargreaves, keyboardist Dan Koontz, bassist Joe Lauro, guitarist Michael Schiano, guitarist Jeff Levitt, and drummer Howard Silverman. In keeping with the style of The Beatles’ legendary harmonies, many of the band members contribute as vocalists. 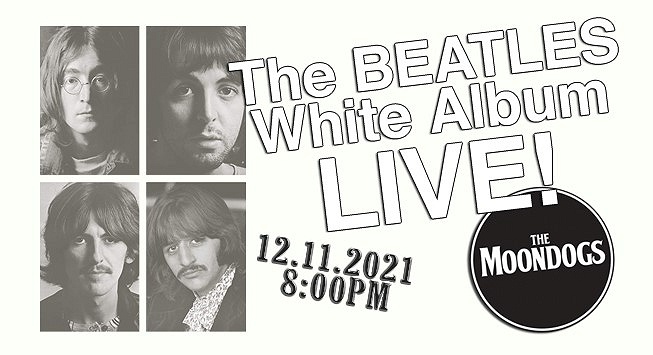