Thrill the World at Islip

Thrill The World is an annual attempt to break the world record for the largest world-wide simultaneous "Thriller" dance. It is done as a tribute to Michael Jackson and for charity. It was created by Ines Markeljevic in 2006, and has been a yearly event ever since.  TTW annually has between 10,000 and 30,000 people participating. In 2006, the first TTW attempt was made and 62 people set the first world record for "Largest Thriller Dance". In 2009 the highest number of people participated, at a total number of 22,562 from 33 countries in 751 events."Thrill Day" is the day when the official world record attempt is conducted. Every year it is different, and depending on your location on the planet, it may land the day before or after the actual set date. This year, "Thrill Day" is set for Saturday, October 27th, 2012. All TTW participants learn the same exact choreography. This choreography was created by Ines to last the entire 5:57 "Thriller" song. It is very easy to learn, and most people learn it in as little as 2 hours. 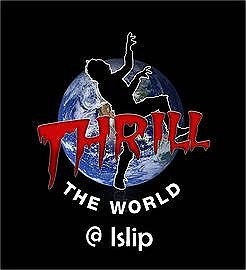