UB40 at The Paramount

UB40 at The Paramount

As part of their 40th anniversary celebrations, Britain’s world-famous reggae band UB40 will release their first new studio album in five years in September 2018, before embarking on an extensive world tour.

The band will also be releasing two companion versions of ‘For The Many’, as Brian Travers explains, “We have really enjoyed making this album, a huge amount of work went into it. It became a massive piece of work so, in addition to the regular version of the album, there will be a dub version and a collaboration version, featuring guest artists from all around the world.”

Travers added, “Both our new album and the tour are going to be called ‘For The Many’, which we adopted from Jeremy Corbyn’s Labour Party slogan. It is our 40th anniversary, so we are doing forty dates to celebrate that. We can’t wait to start that tour in 2019, but the celebrations start this year with our sold-out show at the Royal Albert Hall in June, before our big hometown concert at Arena Birmingham on 21st December.”

Singer Duncan Campbell said, “After ten years of fronting UB40, for us to do an album of our own original material feels like this is the final hurdle for me. The album and its title reflect how UB40 are all in support of Jeremy Corbyn. Both of the songs I have written on the album also reflect this support of The Labour Party. We all feel this album is an album going back to what UB40 was all about. We are all excited for everybody to hear the album and looking forward to touring it.”

Drummer Jimmy Brown said, “‘For The Many’ is our first original album with Duncan, and a true reflection of where the band are at right now. It gave us an opportunity to go back to our roots and draw on the 1970’s-style reggae that inspired us to be in a band in the first place. There’s lots of dub, various guest toasters and a blend of love songs and political songs. Really looking forward to playing some of these tunes live on our 40th anniversary tour in spring next year, and at our Royal Albert Hall 40th birthday gig. We intended to make an uncompromising reggae album and I think we have achieved that. I’m really happy with the final result.”

Co-vocalist and guitarist Robin Campbell added, “‘For The Many’ is a great mix of reggae styles, while the different artists we have collaborated with will appeal to more fans and tastes in reggae – it really is an album for the many. The 2019 UK tour is a continuation of our 40th year celebrations, as well as sharing tracks from our latest album. Forty dates around the UK instead of a few arenas means that our fans from all over the UK can get to see us much more locally and up close – truly a tour for the many.”

UB40 formed in 1978, naming themselves after the unemployment benefit form, before releasing their debut album ‘Signing Off’ in August 1980 – considered by many to be one of the greatest reggae albums ever released by a British band.

It was the start of a career that has since seen UB40 have forty UK Top 40 hit singles and – with sales of over 100 million records – seen their albums reside in the UK’s Top 75 album chart for a combined period of eleven years, making UB40 one of the most successful British groups of all-time.

UB40 will showcase songs from ‘For The Many’ alongside many of their seventeen UK Top 10 hit singles, including ‘Kingston Town’, ‘Food For Thought’, ‘One In Ten’, ‘I Can’t Help Falling In Love With You’, ‘Don’t Break My Heart’ and ‘Sing Our Own Song’ and, of course, ‘Red, Red Wine’, amongst other fan favourites. 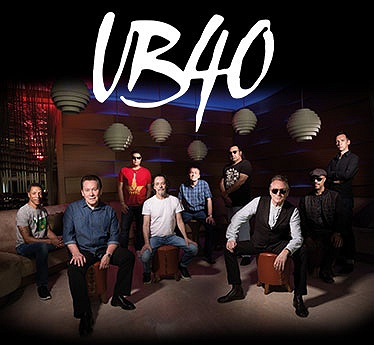