For enduring appeal, the comic operas of Gilbert & Sullivan rank second only to Shakespeare in the history of English-language theater.  But how did W.S. Gilbert and Arthur Sullivan create the operas that have linked their names in fame for more than a century?  The Gilbert & Sullivan Light Opera Company of Long Island answers that question in Very Truly Yours, Gilbert & Sullivan, coming to the Commack Public Library on Saturday, February 16, at 2:00 p.m.

Written and directed by Gayden Wren, with music directed by and accompanied by Thomas Z. Shepard, Very Truly Yours, Gilbert & Sullivan tells the story of the Victorian masters through their own diaries and correspondence, as well as contemporary reviews and memoirs, plus at least one song from each of the 14 Gilbert & Sullivan operas, including H.M.S. Pinafore, The Pirates of Penzance and The Mikado.  The show includes both famous favorites and delightful rarities, making it a splendid evening for seasoned Savoyard and complete novice alike, and for audiences of all ages.

The cast includes five singers, each a veteran of many company productions—the Light Opera Company is 65 years old, but the five singers have well over 100 years’ cumulative experience.  Kara Vertucci of Lindenhurst is the soprano, Terry Hochler of East Meadow the mezzo-soprano, Jonathan Quarant of Oyster Bay the tenor, Ben Salers of Northport the baritone and Martin Fuller of Oceanside the bass, with David Groeger of Long Beach serving as narrator.

“The story of Gilbert & Sullivan is as rich in drama, humor and human interest as any of their operas,” Wren said.  “These were the greatest playwright and the greatest composer of the late Victorian era, working together to create masterpiece after masterpiece—but they were also human beings with human strengths and weaknesses.  Gilbert’s correspondence is as funny as his operas, but he was also arrogant and hard to get along with.  Sullivan was universally beloved, but was a womanizer and a gambler who drove Gilbert crazy by his unwillingness to do anything until the last possible moment.

“This show offers a peek into their working methods, drawing on their correspondence as they wrote the operas,” he continued.  “They were geniuses, but they didn’t always get everything right the first time, and the show reflects that.  Most of all, though, it’s an inspiring story of two proud, ambitious men slowly coming to realize that together they are greater than either is capable of becoming individually.  There’s a lesson there for all of us.”

Very Truly Yours, Gilbert & Sullivan will be presented on Saturday, February 16, at 2:00 p.m. at the Commack Public Library, 18 Hauppauge Road in Commack.  Admission is free.  For further information, call (631) 499-0888 or visit www.commackpubliclibrary.org. 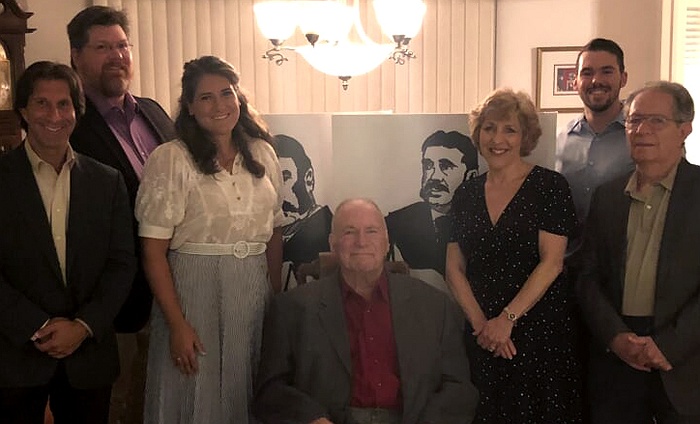