Actor and local resident Ralph Macchio will be one of the sailors taking part in the seventh annual Village Cup Regatta in Port Jefferson on Saturday, September 10, 2016.

Presented by the Port Jefferson Yacht Club (formerly the Setauket Yacht Club), the friendly competition between John T. Mather Memorial Hospital and the Village of Port Jefferson raises funds for Mather’s Palliative Medicine Program and The Lustgarten Foundation, which funds pancreatic cancer research. The event has raised more than $305,000 for the two organizations.

Macchio will act as ambassador for the Regatta for the fourth year to help publicize the important work of the two programs it funds. Macchio’s wife, Phyllis, is a nurse practitioner in Mather’s Palliative Medicine Program.

The Regatta consists of Yacht Club-skippered sailboats divided into two teams representing Mather Hospital and the Village of Port Jefferson. Employees from the Hospital and Village help crew the boats, which race in one of three classes based on boat size. The festivities begin in Harborfront Park at 10 am with WALK 97.5 supplying the music. Regatta t-shirts designed by a local artist and signed by Macchio will be available for purchase along with the event’s commemorative t-shirts, hats and nautical bags. The Memorial Parade of Boats begins at 11 am at the Port Jefferson Village dock. All sailboats participating in the Regatta will pass by the park dressed in banners and nautical flags.

Following the Regatta, a celebratory Skipper’s Reception and presentation of the Village Cup will take place in a restored 1917 shipyard building that now serves as the Port Jefferson Village Center. 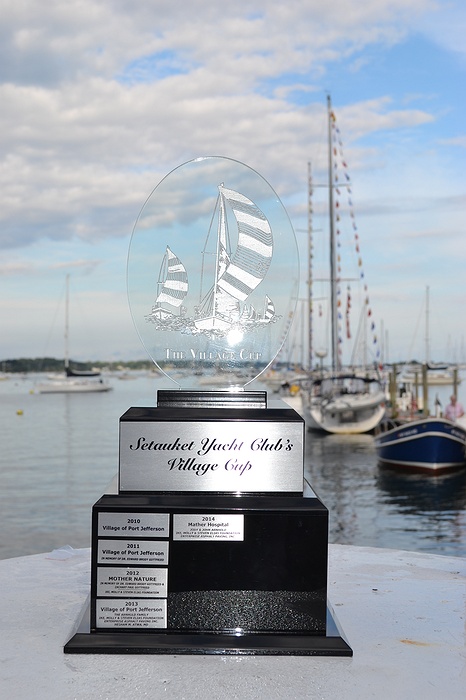