(mostly) TRUE THINGS is a game wrapped in a storytelling show, featuring true stories told by people drawn from the fantastic pool of Moth-winning, comedy-wrangling, heartstrings-pulling storytellers in the New York area as well as people from all walks of life who are entirely new to the experience of sharing a story onstage. The game is this: One storyteller tells the unvarnished truth, the other 3 include carefully-crafted little lies. The audience gets to question the storytellers - who can improvise their responses - then votes for the person they think told it straight. There are prizes involved, if you can believe a thing like that. And the opening act by Overthinkers Anonynous, a Long Island-based improv group gets things going with just the right combination of comedy and heart.

Some improvised, story-inspired music and songs written for the show by host/creator Jude Treder-Wolff and composer Wells Hanley are other ingredients for a high-energy, often hilarious, emotion-packed and entertaining show.

Delicious coffee, tea, hot chocolate or water are included in the ticket price. 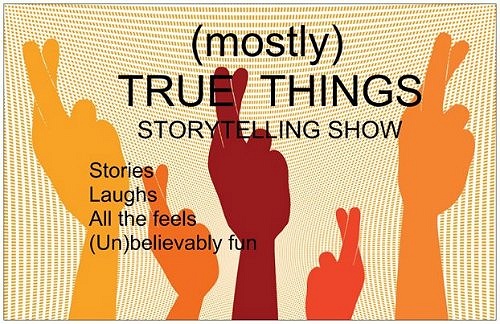